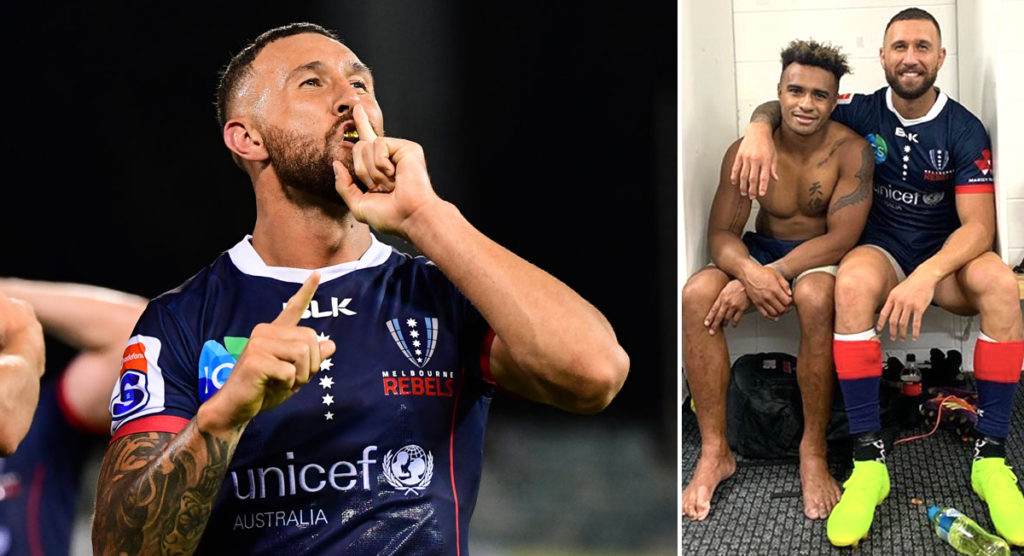 Melbourne Rebels’ Quade Cooper took to Instagram to thank his former club Souths after their win over the Brumbies in the opening round of Super Rugby.

The former Wallabies fly-half spent 2018 playing for Souths in the Queensland Premier Rugby league, after being overlooked by Brad Thorn at the Reds in Super Rugby. Some would have thought that this could spell the end of his Test career with Australia, and indeed in Super Rugby.

However, the Rebels offered him a chance to save his career this season and it looks as though he has taken the opportunity with both hands. The mercurial player was quick to thank Souths for instilling a love of rugby back in him again.

The happiness & love for rugby that @southsrugby instilled in me is with me at the @melbournerebels .. the journey continues ✊🏾🙌🏾💙❤️

The 30-year-old made a composed return to Super Rugby, steering the Rebels to a 34-27 victory away from home in Canberra.

He kicked 11 points from the tee, but showed a level of control that he maybe lacked at the beginning of his career. He kept the Brumbies pinned back in their half for the majority of the second half, as the Rebels came back from a halftime deficit.

Cooper also made a crucial try-saving tackle on centre Tevita Kuridrani in the opening minutes of the match, which could have completely changed the complexion of the game.

It also marked a return of his partnership with Will Genia, who also had a brilliant game. With performances like this one, there will be a growing consensus that Cooper may have a real chance of reclaiming the Wallabies number 10 shirt this year.

Meanwhile, All Black and long-time friend Sonny Bill Williams also took to Instagram before the game to wish good luck to Cooper on his return.

Smooth waters never made a good sailor my brother. Good to see you back out there doing what you love. In Shaa Allah you do your thing tonight! ❤️ @quadecooper

The Blues centre, who is in action tomorrow against the Crusaders, is just one of many in the rugby fraternity that is happy to see always entertaining Cooper back after a troubling year on the pitch.