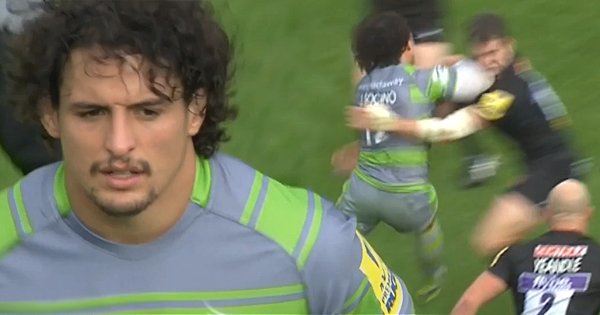 Newcastle Falcons centre Juan Pablo Socino has been suspended for two weeks after a RFU disciplinary panel found him guilty of striking the head of Exeter Chiefs centre Ian Whitton. It brings into question the fine line between fending with the forearm and the elbow.

From the restart of the second half of their Premiership contest last weekend, Socino carried the ball into contact but led with his forearm, catching the face of Whitton in the process.

A yellow card was issued and Independent Citing Commissioner Peter Larter then cited Socino for striking with his arm, contrary to law 10.4(a). The disciplinary panel then issued a four week, mid-range ruling.

They then reduced that, as explained by chairman of the panel, Antony Davies.

“The panel found this was a reckless act in which the player made contact with the opposition player’s jaw with his forearm. In line with the new sanction table, this mandates a mid-range entry point. Thereafter the panel gave full credit for the player’s previous record, his good character (displayed both on-field in remaining with the injured player and at the hearing) and reduced the ban to two weeks.”

Socino can be seen showing genuine remorse and concern for Whitton directly after the clash, in a similar vain to what we saw with our 5 Times Sportsmanship Prevailed after Brutal Hits post, and looked a bit bemused by the decision.

Captain Will Welch questioned the decision, stating that Socino was bracing for impact, but the reply was simply that it was an illegal fend (plus something else that the commentator spoke over).

Socino was charged with contravening Law 10.4(a), Punching or striking – A player must not strike an opponent with the hand, arm or fist, including the elbow, shoulder, head or knee(s).

In 2013 Bismarck du Plessis was controversially sent off for a second yellow card after he raised his elbow into the throat of an All Black tackler, and a year later Canadian Jebb Sinclair hit the headlines after he was red carded for something even milder, as he ran over a Scottish player.

Going into contact with the forearm is commonplace, so this looked more unfortunate than anything, particularly considering the player’s reaction.

It’s probably one for the law gurus and armchair referees out there to discuss.