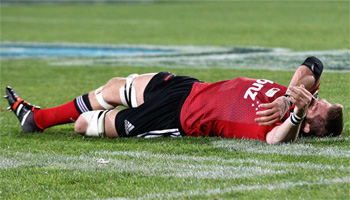 All Black flanker Richie McCaw was left unconscious for a short period in the Crusaders Super Rugby match this weekend after taking a nasty knock to the head whilst making a covering tackle on Blues fullback, Lolagi Visinia.

After securing an impressive turnover, the Blues were quick to spread the ball to the wing in an effort to launch a counter attack against a disorganised Crusaders defence.

McCaw rushed forward to make the hit, but unfortunately his head ended up on the wrong side as he made contact, causing his body to immediately appear limp as he fell to the floor.

Play continued as the Crusaders openside lay prone, devoid of movement for a good few seconds, and when he did eventually come round he was visibly dazed and uneasy on his feet.

Immediately following the collision McCaw was expected to undergo concussion tests to see if he was able to continue, but having viewed the replays Crusaders coach, Todd Blackadder, determined himself that his flanker had been knocked out and must be replaced.

Blackadder was very clear in his stance that, although he appreciates just how important a presence the openside flanker brings, the safety of his players is paramount.

The latest is that McCaw has been ruled out of the Crusaders’ crunch match with the Hurricanes due to the time frame needed for recovery.

“He had a bit of a mild headache yesterday morning and by yesterday evening he was feeling really well,” Crusaders doctor Deb Robinson explained on Tuesday. “But we made the decision that, if was still symptomatic on Monday, he wouldn’t play this weekend.”

She added that his last concussion was back in 2011, and said that he’s been at the Crusaders team meetings and if he’s feeling better tomorrow, will start doing some bike work, which will start his road to recovery. He is expected to be fit for the Reds clash the following week.

The incident is reminiscent of Leigh Halfpenny’s recent concussion in the Six Nations when he got his head on the wrong side whilst tackling Italian Number 8, Samuela Vunisa.