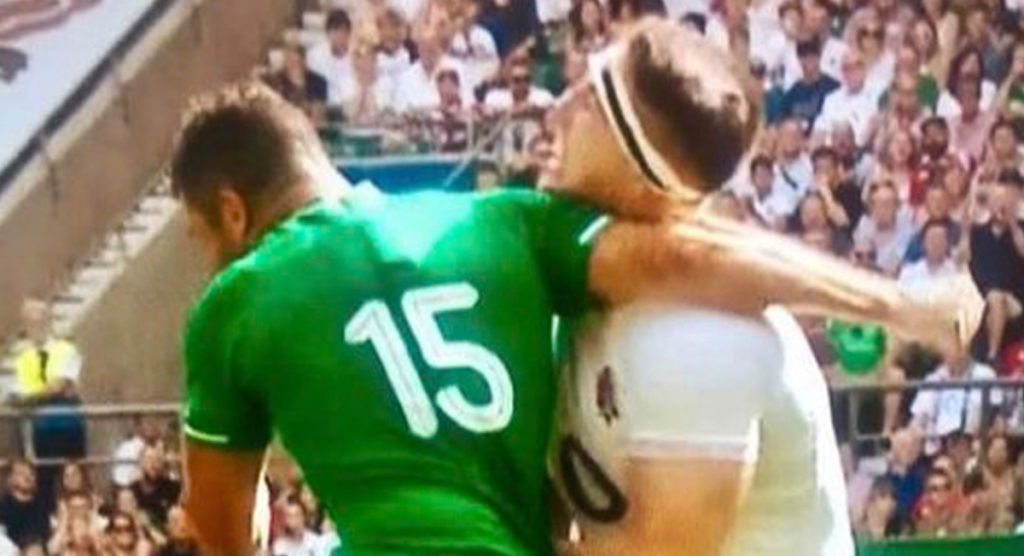 A common theme in international rugby over the past month has been the number of dangerous and illegal challenges that are discussed post match. England’s 57-15 win over Ireland Saturday was no different, with a few players deemed lucky to avoid being cited.

One particular incident in the match was Rob Kearney’s late clothes-line of Tom Curry in the build up to Elliot Daly’s try.

The flanker gave the final pass to Daly before being cleaned out by Ireland’s fullback, leaving many England fans still questioning how it was not picked up.

How did this clothesline on Tom Curry not get looked at again? Proper naughty from Kearney!! #ENGvIRE

Remind me why the TMO is there……🤔🤔🤔 pic.twitter.com/jYwTCTlKIk

As England scored a try immediately after, Kearney’s hit may have slipped under the radar. But that does not seem to be an excuse for some England fans, who feel that this was dangerous play from the Leinster man.

Irish fans have responded by highlighting Manu Tuilagi’s hit on Jordan Larmour in the second-half, although that hit is far more debatable as to whether it was legal or not. A debate has subsequently ensued comparing the two hits, but England fans feel Kearney’s was far worse.

Unlike these two incidents, George Kruis was punished in the final stages of the game for a late hit on Jack Carty; something that he immediately knew was wrong.

But at a time where almost every tackle is scrutinised at great depth, England fans feel somewhat aggrieved that Kearney was neither punished during or after the match.

Had the scoreline been closer, this tackle may have caused even more outrage, as Dan Biggar’s tackle on Maro Itoje did the week before, but missing incidents like these may concern some fans with the World Cup approaching.

Wow that’s red all day. Horrible and might reckless. Should be cited.

What are the Officials up to? Absolutely shocking referee teams over these “warm up” full blown test matches! That could have been Curry’s RWC/Career over

Rob Kearney on Curry was miles worse, swinging arm right to the jaw! Manu hits the ball, they are coached that way. Stop the off load, try to dislodge the ball, which is exactly what happened.

Seriously?
There is a major difference between those hits. Tuilagi comes in beneath shoulder line, hits hard and eventually wraps, although a bit late I will concede (which BOD thought was fine btw, and I do believe he’s Irish). What Kearney did was not a tackle. Assault, maybe. pic.twitter.com/Isp2V7Ts84

There's no discussion to be had about Kearney – it's clearly illegal. I thought yellow at the time but replay shows a clear red. Manu situation is not nearly as clear cut hence the different levels of discussion.

As mentioned, a high shot from Biggar on Itoje last week proved to be a topic for debate, as did France’s Paul Gabrillagues wreckless clear out at a ruck against Scotland, something that he was banned for.

The officials cannot always be blamed for missing incidents like these, but as World Rugby continues to strive to make rugby safer, there has been a disconcerting number missed over the last couple of weeks.

Rob Kearney not getting cited for his clothesline on Curry is a disappointment. So much for player safety @WorldRugby eh?