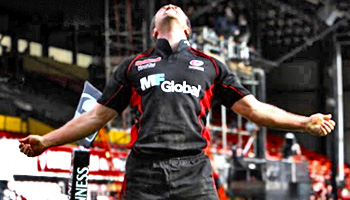 Saracens have been the topic of much debate and discussion of late as they are in the process of a major shift in personnel in the club. Coach Eddie Jones has left, and many of the players have been told their services are no longer required.

Taking everything into account, their come from behind victory over Bath on the weekend was awe-inspiring. Three tries in the last 15 minutes meant that they snuck victory 20-16, showing fantastic spirit amidst the turmoil at the club.

Despite Bath dominating for practically 70 minutes, Saracens pulled off the impressive win, in front of a delighted 8000 fans at Vicarage Road.

Winger Rod Penney, who was later named Man of The Match, scored twice, with this 100m solo effort from an ill placed Butch James stab through.

The length of the field dash belied his age as he held off would be chasers to dive over for a sensational try.

I was a cracking match, a fantastic comeback win, and an excellent sprint for the try by Penney. With determination like this on the field, we can only hope that the men behind the scenes will sort out the disorder off it.