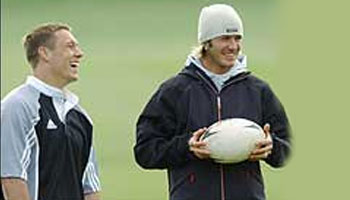 I found some funny rugby adverts. I’ll keep adding more to this post, so if anyone has anymore good ones please let me know.

Which is your favourite?

Love something this much? Super12 Rugby Advert
Rugby or females? Tough choice…

Street Haka
This is an ad about some All Black fan doing the Haka in the middle of town.
A bit odd, but funny to watch anyway!

Stephen Larkham Drop Kick Advert
In the 1999 World Cup Semi Final, Stephen Larkham broke the heart of every South African by dropkicking a 40 meter kick to knock them out of the tournament.
Larkham had never dropped a kick in a game before, and is known more for his brilliant running game than kicking. This ad is hilarious. If anyone has a better quality version plz send.

The old Razzle Dazzle
This is an ad for the Super12 featuring the Aussie players. They sing while playing. Clever, but they look very gay in it!!

All Blacks vs British Lions Advert
Very cool ad featuring the players from this tour playing the game we like to call British Bulldog, or Bullrush in some countries.
Quite a long clip, but a great ending.

Awesome Nike Advert
This is an excellent ad featuring some of the top players from a few years back. Very well made.

Adidas All Black Advert
Apparently university made for Adidas, this ad is awesome.

Leeuloop Vodacom Advert
This is a current South African advert that is absolutely brilliant for the simple reason that the song is really catchy, and the guy (Robbie Wessels) is dancing around like an idiot. Apparently some people have complained about the ad though saying that in Afrikaans the word ‘Leeuloop’ refers to when drunk men take off their clothes and walk around like a lion, with their ‘tackle’ between their legs! Whatever it means, still a very entertaining ad!