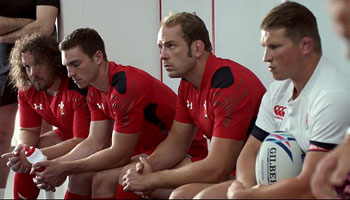 England Rugby 2015 launched the ticketing drive for next year’s Rugby World Cup today with an advert that features actor Charles Dance of Game of Thrones fame. More significantly, it also includes Test players from some of the competing nations.

The video features Dylan Hartley, George North and Andrea Masi as well as legends such as Martin Johnson, Serge Betsen and Sir Ian McGeechan mixed in with fans, mascots and referees.

It’s directed by Peter Cattaneo of Full Monty fame, and stars Dance, who himself is a big rugby fan.

It’s an impressive production, but sadly falls short without any key members of the best three teams in the world included, namely the World Champion All Blacks, the Springboks and the Wallabies. Logisitical reasons no doubt, but Ashley Johnson is there, who last played Test rugby in 2011, so perhaps they could have tracked down someone relevant to wear a black or yellow jersey.

Aside from that, there are some fascinating extras included, for example the Millennium Stadium groundsmen, Aston Villa and Leicester City mascots – representing two of the RWC 2015 match venues –  and Great Britain wheelchair rugby player Paul McDerby.

The world’s best 20 teams will compete in 48 matches, played at 13 venues up and down England (and Cardiff) with 1 million tickets going on general sale this month.

“Tickets are at a range of prices starting at £7 for children and £15 for adults and we look forward to welcoming everyone to the event next year,” said Debbie Jarvis, organising committee CEO.

Tickets for RWC 2015 go on general sale Sep 12-29 at tickets.rugbyworldcup.com