Ryan Lamb's brilliant try vs Saracens in the Guinness Premiership 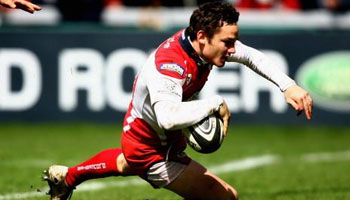 With the Guinness Premiership season kicking off exactly a month from now, we look back to one of the tries of the season, scored by a young man who will surely be vying for international honours come selection time later in the year.

Log leaders Gloucester were on fine form in the Premiership in April as they romped home to a 39-15 victory over Saracens. The six try win came in part from a stunning performance from flyhalf Ryan Lamb, who scored two tries, kicked smartly and controlled midfield with the authority of a seasoned veteran.

The flyhalf, who bagged 19 points on the day, including two tries in three minutes, was expected by many to be receiving an international call up after numerous quality showings such as this. It wasnt to be though, and hell have to do it all again this season in the hope of beating out the likes of Wilkinson, Cipriani, and Geraghty.

Early in the second half of this entertaining match at Kingsholm, the Gloucester onslaught began as a clearing kick from Neil De Kock stayed in field, only to be popped up to Lamb who burst through the narrowest of gaps on the way to scoring a stunning solo try. He sidestepped past two defenders, with his dismissive jink past Richard Haughton bringing back memories of the great steppers of the Seventies.

The try was converted by Lamb himself, who then only a few minutes later intercepted a De Kock pass to run in unopposed for a long range saunter that added another seven points to his tally.

The double blow meant no way back for Saracens, and Gloucester went on to top the table at the end of the season, despite not making it into the final where we saw Wasps lift the trophy.

The performance by Lamb and this try in particular, will be one to cherish for Gloucester and rugby fans alike, as the audacity and quality of that final step can only make you sit back and applaud, no matter which side of the fence youre sitting on.


England Saxons beat Scotland A to win the Churchill Cup