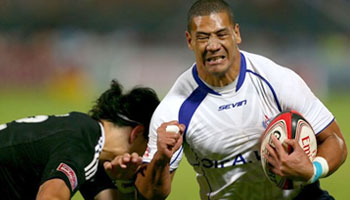 Samoa beat New Zealand 26-15 to take their first ever Dubai Sevens title in yet another enjoyable series of the HSBC World Series Sevens. Flyer Paul Perez scored twice in the final, including a try directly from the kick off.

On a day that New Zealand rugby fans would rather forget, Samoa got off to a great start in the final, with Perez scoring after just 20 seconds.

Early in the second half things were tight at 19-15, but a Tulolo Tulolo try put things out of reach for the men in black and secured a great win for the Samoan side.

“It was a very exciting moment for the boys. They played very well. There are a lot of new guys on the team. They stepped up and believed they could do the job,” said Samoa captain Afa Aiono, heaping praise on Perez specifically.

“He’s been a really good player since he came into the sevens and he has a lot of input in the team. He is the other most experienced guy on the team.”

Kenya came third after they beat France 15-12 in the Third Place Playoff, while Wales beat Canada to win the Plate, Argentina won the Bowl, and England won the Shield.