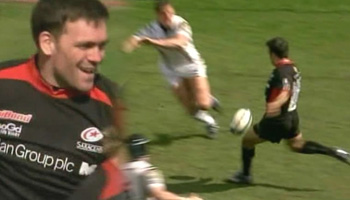 Saracens overcame a star studded Ospreys side on Sunday to head through to the Heineken Cup Semi Finals. Saracens came out tops in an entertaining game that saw the Ospreys commit far too many errors which had Saracens capitalising on the opportunities given to them. A combination of great defensive tackling and gritted determination saw the men in black coming out victorious 19-10.

The game turned shortly after half time when Neil de Kock found himself in trouble in his own 22. His hurried kick took a deflection from Marty Holah’s charge down, which instantly put all other Saracens players onside for Francisco Leonelli to score in the corner.

There was a fair bit of confusion in the stadium and even for some viewers at home, but the rule is that if a kick is charged down or touched by an opposing player, all other players are put on side.

Saracens will now face Munster in the Semi Finals.

We’ll be adding highlights of the other quarter finals in the next day or two, so stay tuned.