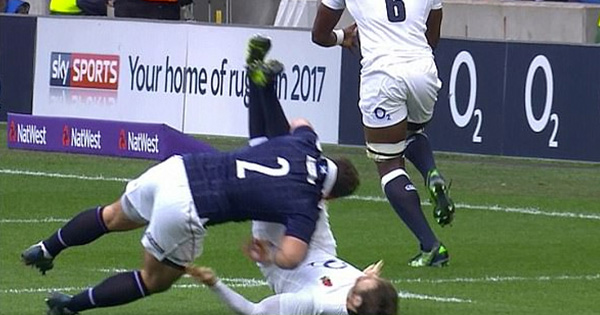 Scotland hooker Fraser Brown was sin-binned in the opening minutes of the England and Scotland match this past weekend. Many felt the hooker was fortunate to come away with only the yellow, after he lifted and dumped Daly in a dangerous tackle.

In his decision for the yellow card, referee Mathieu Raynal explained the reason being that Daly had landed on “the top of his back”, thus he decided against the red card.

Either way, the tackle insured that Scotland would be facing an uphill battle from the very start. Given the magnitude of the match and despite some genuine injury concerns, it seemed Scotland had a chance of making some serious waves with a good showing.

The Glasgow Warriors hooker’s mistake was not something the visitors could afford though, and unfortunately this was but a small sign of the match to come, as England went on to hammer Scotland 61-21 to retain the Calcutta Cup and the Six Nations title.

Brown is not out of the woods yet, as he’s been cited for the tackle and will face a disciplinary hearing today (Tuesday) that could potentially see him miss their final match, against Italy.

As for Daly, he will continue to be monitored throughout the week for a suspected concussion that forced him from the field before half time.

UPDATE: The disciplinary committee found that the act of foul play would have not have warranted a red card, and so the citing complaint was not upheld and no sanction was imposed. Brown is free to play.

Full details:
Fraser Brown, appeared before an independent Disciplinary Committee, having been cited by an independent Citing Commissioner.  The player accepted that he had committed an act of foul play but argued that it had not warranted a red card.

The Disciplinary Committee, chaired by Jean-Philippe Lachaume (France), alongside Rhian Williams (Wales) and David Martin (Ireland), having reviewed footage of the incident and all other evidence, as well as hearing submissions and testimony from the player and his representatives, considered the tackle to have been dangerous, and therefore contrary to Law 10.4(e).

The Disciplinary Committee, however, found that the act of foul play would have not have warranted a red card, and so the citing complaint was not upheld and no sanction was imposed. (The Disciplinary Committee also considered whether or not the player, in carrying out the tackle, had infringed Law 10.4(j), but found that not all of the necessary elements for foul play under that law had been present). The player is therefore able to resume playing immediately.

Law 10.4(e) – A player must not tackle an opponent early, late or dangerously.
Law 10.4(j) – Lifting a player from the ground and dropping or driving that player into the ground whilst that player’s feet are still off the ground such that the player’s head and/or upper body come into contact with the ground is dangerous play.