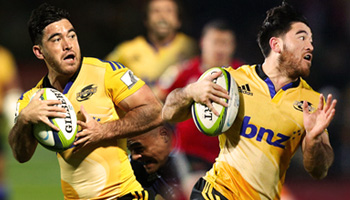 Nehe Milner-Skudder has had such an impressive debut season for the Hurricanes that he has been called into New Zealand’s Rugby Championship squad, and although not in Friday’s team to face Argentina, the experience can only help him.

Milner-Skudder, 24, first came to the fore when playing for rugby league side Canterbury Bulldogs under-20s before featuring for New Zealand in touch rugby. He then moved back to local club Manawatu and tore teams apart in the ITM Cup.

Hurricanes saw his potential and included him in their 2014 Super Rugby wider training squad before he became an official squad member in 2015. He hasn’t looked back since.

“I don’t know how to explain it, it hasn’t quite sunk in, but I’m buzzing at the moment,” Milner-Skudder said of his recent All Blacks squad call up.

“I was coming back from Palmy and with a bit of flooding going on we sort of took our time. I just walked in the door, turned the telly and heard my name. I was taken aback, it’s a bit of a shock,” added the player that has had everyone talking this season.