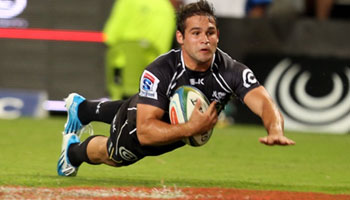 Pat Lambie scored a try after the hooter to give the Sharks a 31-16 bonus point victory over the Bulls in Durban on Saturday evening. There was controversy surrounding one of the tries though, and it has since been confirmed that it shouldn’t have been allowed.

It was ruled that lock Anton Bresler had not knocked the ball forward, or played his opponent in the air, but SANZAR referees boss Lyndon Bray has admitted that the try shouldn’t have been awarded.

“We unfortunately got the TMO decision wrong,” said Bray. “The Sharks forward did knock the ball forward out of the Bulls player’s hands. Also, there was consideration to the fact that the Sharks player obstructed the Bulls player in the air.”

Reinach was involved again on the stroke of halftime as he ripped the ball from number eight Pierre Spies before Francois Steyn’s crosskick set up Odwa Ndungane for a great try in the corner.

Victor Matfield made his return to rugby after retiring in 2011, but he didn’t have much of an affect on the outcome. Coach Frans Ludeke believes that he is a classy player and he’ll continue to improve as the tournament goes on.

On fulltime the Sharks were searching for a bonus-point try, and they got it following multiple phases after the hooter. Lambie took the try well, ending on a personal haul of 16 points.