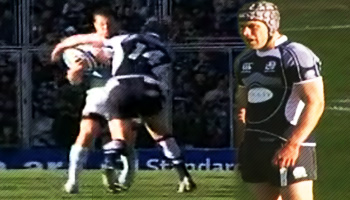 On the weekend we saw Scotland achieve a historic

in Buenos Aires. It was a physical game, as it always is when you play Los Pumas, and despite the final score, the Scots will have known they were in a fierce battle when waking up the next morning.

One of the biggest hits of the match came from a surprising source though. When you think of the words

, you immediately think of

. But no, this came from none other than little wing Simon Webster.

Webster was penalised for this bone-crunching hit on Federico Aramburu, who had just come on to the field as a replacement.

The tackle was aimed at the chest but ended up being marginally high, with a penalty probably being a fair call, and neither touch judge getting involved or recommending a yellow, as can sometimes happen.

Whatever the call though, the impact was huge as the ball popped out of Aramburus arms, which all added to a great tackle to watch, but one youd rather not be on the receiving end of.