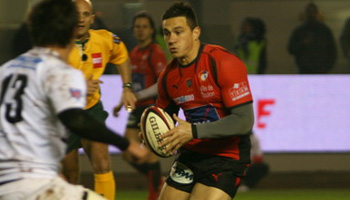 Toulon came from behind to put in an inspired second half performance against fellow relegation candidates Mont De Marsan this past weekend.

With all the talk focussing on the comeback of coach Tana Umaga, it was in fact another New Zealander who took center stage, sparking the impressive comeback which saw them score some fantastic tries.

Playing at number 13, Sonny Bill Williams finally came right for the southerners as he played a staring role in the 38-22 win, sparking the home side that were down to 14 men twice during the match.

The 15th man though, the crowd, lifted the team to victory as they came back from being 19-13 down at halftime.

The win gave them a much needed bonus point, and lifted them two places in the table, up to 11th.

Umaga stayed in the stands, so is yet to make his comeback appearance, but he was not needed as Czech international Martin Jagr scored a classy double, as did New Zealand winger Sinoti Sinoti.

It was Toulons first league win since beating Biarritz in November.

“Tonight we had cohesion, togetherness and we saw players like Sonny Bill Williams expressing themselves 100 per cent,” Toulon assistant coach Aubin Hueber said.

Some great skill and tries shown, the contributor felt the music went nicely with it. Enjoy.

Let It Rock by