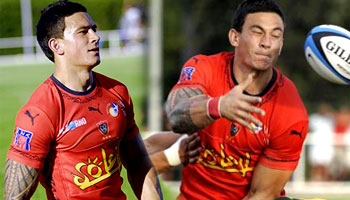 We recently reported on the sensational move of NRL star Sonny Bill Williams to Toulon in France. A whole lot has happened off the field, culminating in a NSW Court order from the NRL to stop him from playing. Despite that, Williams made his debut for the newly promoted Top 14 team yesterday, playing well, but earning a yellow card in the process.

Williams displayed the star factor thats been associated with his career since he was a teenager. Thousands turned out to watch him strut his stuff in the pre-season friendly against Carqueiranne-Hyeres.

It was a mixed day for the New Zealander, as his team won easily 50-5, but he himself received a yellow card for a shoulder charge that is most definitely not part of the Union code.

His victim afterwards described the hit as it being like an electrocution.

Williams will adjust to the laws quickly though, and with the glimpses of brilliance he showed while playing on the wing – one handed offloads and basketball like skills – he is sure to be a superstar in France.

Off the field though he faces his biggest challenge, as walking out on his contract with the Bulldogs two weeks ago has put him in the spotlight, with the NRL lawyers and top dogs out to make things right, which could actually mean he’ll face jail time if he continues to play in defiance of the NSW Supreme Court injunction.

NRL boss David Gallop said they have “no choice” but to continue the legal pursuit of the Bulldog, warning that if he plays again, when Toulon meet Toulouse for a friendly on Friday night, they will be forced to take things further.

Williams is not only flirting with a jail term for contempt of court, but he risks losing his Australian assets, including his $1.3 million Caringbah home.

“It’s one thing not to comply with an obligation you have in a contract, it’s another thing altogether to defy an order of the court,” NRL lawyer Tony O’Reilly stated.

To avoid being personally served with the injunction before kick-off, Williams travelled to the game by car, rather than the team bus. He also didnt warm up with the team, but received a huge ovation from the crowd, despite it being an away match.

Speaking to a Sydney newspaper he said he’s prepared to go to jail for what he believes in.

“What I’ve done, it’s shown it’s just not about me, it’s about the boys getting a fair go, you know what I mean?” he said. “It’s about them having the balls to stand up for themselves, and get what they should be getting.

“Hopefully some good can come out of what I’ve done and it wakes everybody up and they realise that something needs to be done.”