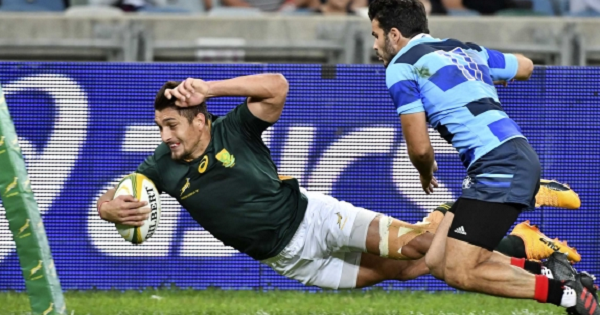 The South Africa ‘A’ recorded their second victory over the French Barbarians in as many weeks with a 48-28 win at the Orlando Stadium in Soweto last weekend.

As expected after the previous week’s encounter, which the hosts won 36-28, this match was yet another try-fest with the home side dominating from the outset to take a comfortable victory. Testament to how open the game was, was that each side had touched down inside the opening five minutes.

The home side were soon down to 14-men for the remainder of the match when Ruan Botha was shown a straight red card (see below) for a shoulder strike on Estebanez at a ruck. The visitors were also reduced – albeit for 10 minutes – to 14 men as well when Jean-Baptiste Dubie was sin-binned.

The teams then spent the next 10 minutes battering each other through the forwards and bagged a push-over try apiece for a 14-14 game after half an hour.

But the Springbok A team had more in the tank and pulled away either side of the break. First, loosehead prop Ox Nche ran nearly half the pitch and showed a remarkable turn of speed to cross for the Bok’s third try, while flanker Chris Cloete touched down a minute into the second period.

From then on it was a case of stretching the advantage for the Springboks and they did so impressively despite the deficit in numbers. They ran out easy victors with further tries from Lionel Mapoe and Gelant to round out the game.