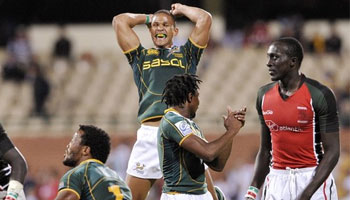 South Africa successfully defended their Adelaide Sevens title with a convincing 26-7 win over Kenya in the final on Sunday. It was the first ever all Africa final, something which should go a long way in terms of the drive to get Sevens into the Olympics.

Kenya, who have come on immensely of late, had actually beaten South Africa 15-14 in the pool stages the day before. The final was too big an ask though, with the experience of the title holders showing.

“It is a good feeling because the guys were really heartbroken last night when we lost our last pool match against Kenya. I think they wanted to make up for it today.”

The Springbok Sevens side stretched their lead over England in the overall series to 28 points, with just two legs left.

Sitting on 104 points now, they are the frontrunners with England behind them on 76, Fiji on 74, Argentina on 68, and New Zealand on 64. Unless things go horribly wrong in London and Edinburgh, it looks like theyll take the series.

Treu said they’re not going to get ahead of themselves just yet though.

“Yes, it is going to be difficult for the other teams but we would tend to focus on the things that are in our control and win more tournaments.

“Credit to Kenya. They played in their first IRB final and are improving and they deserved to be in the final.”