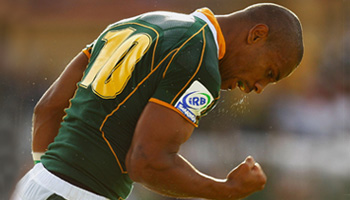 New Zealand’s Sevens team can be beaten. Since December 2006, we all thought those words would never be uttered. But, on the weekend in Adelaide, South Africa finally ended the men in black’s 47 match winning streak in the Australian leg of the IRB Sevens World Series.

A classic match that saw the Boks having to gang tackle and defend like men possessed when needed, South Africa succeeded in denying New Zealand too much ball and avoided the confrontational, physical type of game on which they have thrived all season.

Unbeaten in the last 7 tournaments, the New Zealand side are big, strong, and incredibly fast. Led by DJ Forbes and mentored by legendary Sevens coach Gordon Tietjens, the multi-talented teams winning streak, that looked to last all season, was broken by the determined resistance of the Boks.

The incomparable Victor Vito scored another unstoppable try for the men in black, which we’re becoming used to from the big guy, but it was the Springboks who came out on top and celebrated a historic 15-7 win in front of the 17 000 strong Adelaide crowd.