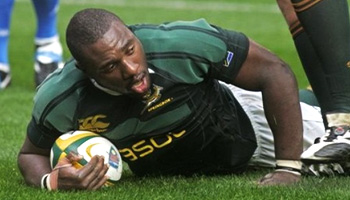 It was a tight, often untidy affair as the world champion Springboks overcame the Azzurri 26-0 at a rain lashed Newlands Stadium in Cape Town.

South Africa showed promise in both the tight drives and the loose interplay though could not stop the conditions from affecting multiple handling errors at crucial times. Francois Steyn, who started in the number 10 shirt, scored the try of the game following some vintage play from 2007’s Player of the Year Bryan Habana, who had gone under the radar somewhat in the previous two Tests.

Habana beat numerous defenders, before Steyn backed himself with a kick through, then scooped the ball up with ease before diving over for a top quality try.

Bismarck Du Plessis found himself with a brace of tries, both from powerful lineout drives while Tendai “The Beast” Mtawarira got himself on the end of a sweeping Springbok attack to touch down for his first ever Springbok try.

Italy, on the other hand, competed where they could with flyhalf Luke McLean using his boot to control the play when possible. Apart from Alessandro Zanni holding his own against the likes of Luke Watson of South Africa, the Italians struggled to match their opponents in tight situations.

That said, playing the world champions in their own backyard is never going be easy and this should be seen as a building block towards an improved showing against Los Pumas in Argentina next weekend.

Springbok captain Victor Matfield admitted, “We won’t be able to do that against the All Blacks,” but will no doubt be happy with the win, despite coasting for most of the game.