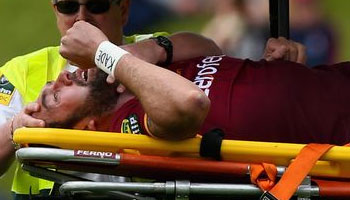 MacDonald collapsed midway through the first half, clearly struggling and in pain before being stretchered off. He was reportedly talking to the team doctor but then went into cardiac arrest (off camera), and after 15-20 minutes of vigorous CPR, a defibrillator had to be used.

He was worked on by ambulance staff, rugby doctors, police, and firefighters before being stabilised and transferred to hospital.

“MacDonald was taken by ambulance from ECOLight Stadium to Middlemore Hospital,” a New Zealand Rugby Union statement said. “He has been put in an induced coma and is stable.”

The commentators at the time didn’t realise the seriousness of the situation, speculating that the 34-year-old could possibly have injured his head or neck.

“We were very worried up in the box because we saw him try to stand, and then tumble,” said Counties coach Tana Umaga. “He started running and then fell over. It was pretty bad.”

Umaga and other coaches have had concerns over the amount of games played this season, where the tournament has been condensed with little turnaround time between matches.

“It shouldn’t be life or death what we do,” Umaga said. “It’s a game we play for fun, and players’ health should be paramount. That’s something out of this competition that has to be looked at.

“It’s about the health of the players. Hopefully they investigate it fully and it doesn’t happen again, because I’d hate for this to escalate and be something more. Luckily we’ve got the health professionals to do a great job and look after him.”

Southland coach Dave Henderson didn’t know exactly what had happened, so at halftime didn’t mention that it was anything serious to the players. He told them after the game.

“They are pretty down. We got them in the changing shed and told them what had happened, but we’re still not sure what the problem is, but it is serious,” he said.

A former Junior All Black and New Zealand Maori representative, MacDonald has also played Super Rugby for the Melbourne Rebels and Otago Highlanders.

His fiance and two young children have been flown in to spend the night at his bedside.

“Southland Stag Hoani Macdonald has started to come out of an induced coma and is showing early positive signs including acknowledging questions and recognising people around him.

“While this is positive news, he remains in intensive care at Middlemore Hospital and his condition is described as stable,” he added.