Springboks intensity too much for World XV at wet Newlands 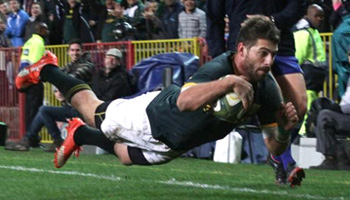 The Springboks had an impressive first showing of the season as they proved too strong for a World XV at Newlands on Saturday. Willie le Roux scored a hat-trick, while Jean de Villiers made his return. The touring squad for the Rugby Championship has since been chosen.

Led by Bakkies Botha and featuring a number of South African and Toulon players, the World XV couldn’t keep up with the intensity that the Springboks side showed up front, and the quality interplay and finishing out wide. The hosts scored seven tries, with Damian De Allende and Le Roux impressing in the backs, for a 46-10 win.

“We needed confidence from this match, so I am very happy with seven tries to one,” said coach Heyneke Meyer. “Next week will be a different challenge though and we will be tested when we face Australia.”

“We obviously need to fix a few things, but I am very positive with our performance today. To be honest, I actually expected the guys to be a bit more rusty out there, but our fitness and some combinations worked out well,” added Meyer.

The Springbok squad on the way to Brisbane, for the opening match of the Rugby Championship against the Wallabies next Saturday, features 22 of the players who performed against the World XV.

Jean de Villiers was pleased with his return after an awful injury setback, but he will stay behind to regain match fitness with Western Province in their Currie Cup warmup matches.

“I would like to give as many of our squad members as possible game time in the build-up to the Rugby World Cup, so there will be changes against the Wallabies,” said Meyer.