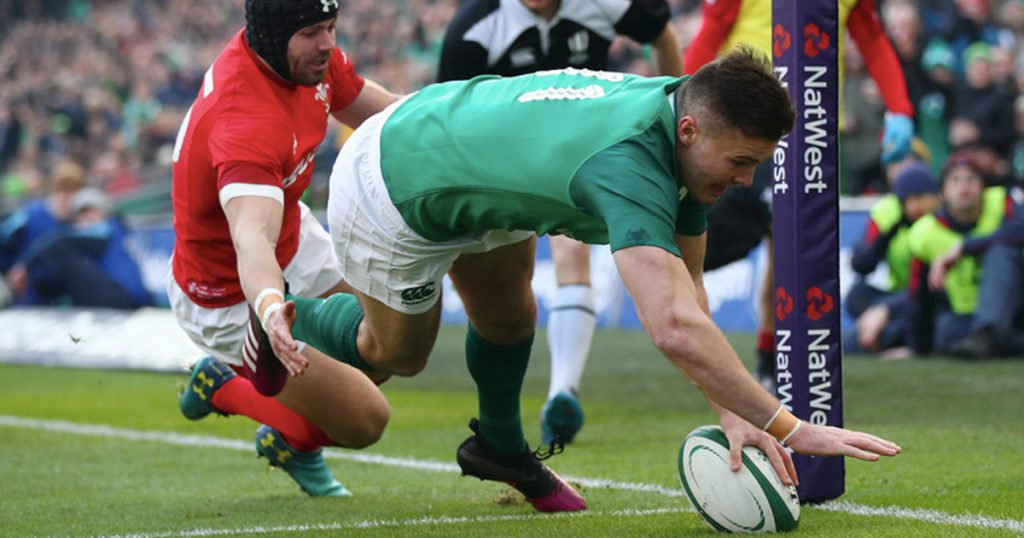 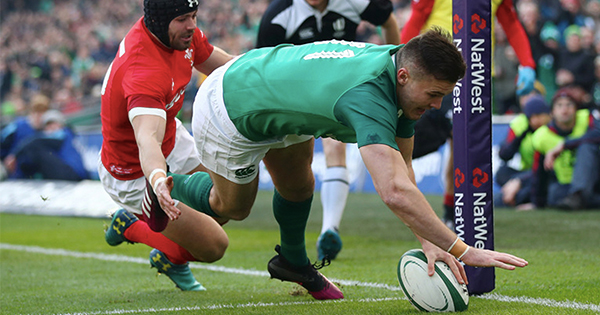 A late interception try from Jacob Stockdale enabled Ireland to claim a thrilling 35-27 victory over Wales at the Aviva Stadium in Dublin to keep their 6 Nations title hopes alive.

Wales leapt to an early lead courtesy of a Gareth Davies try and eight points from the boot of Leigh Halfpenny. But Ireland fought back and took a 15-13 lead at half-time through tries from Stockdale and Bundee Aki.

Further scores from Dan Leavy and Cian Healy looked to have secured the win for Joe Schmidt’s side but Wales again responded via Aaron Shingler and Halfpenny to set up a grandstand finish.

But Stockdale’s second try in the final minute put paid to any hopes Warren Gatland’s men had of snatching an unlikely win.

Ireland now welcome Scotland to Dublin in a fortnight’s time as they continue their search of a first Grand Slam since 2009.

Ireland clinical from the out-set but rue Sexton misses

Having dominated both possession and territory from the off, incredulously Ireland trailed the visitors after half an hour. Stockdale’s first score was orchestrated by a brilliantly flat pass from Sexton five metres out.

Their second was more traditional. The forwards piled on the pressure and centre Aki picked up from the base of the ruck to crash over.

Ireland had the superiority that was for sure. But Sexton missed two penalties and a conversion which left the home side only two points ahead at the break.

The second half showed more poise and control from Ireland and they looked like a runaway train when first Leavy barged his way over under the posts, and then Healy touched down in the corner.

But Wales still fought back.

Davies’ try and Halfpenny’s boot kept the Welsh in the match when they probably shouldn’t have been. But it was indeed this perseverance that helped Gatland’s men strike when they found their chances.

Shingler’s effort reignited the flame inside the Wales camp and was more than a simple blip for Ireland.

Halfpenny’s touchdown with mere minutes remaining, however, made for outstanding tension in the dying stages.

That it came down to a brilliant interception try for Stockdale in the final minute ensuring that this fixture goes down as the most entertaining match of the championship so far. Wales ultimately came up short but will take solace in the fact that they secured what could be a vital losing bonus point.