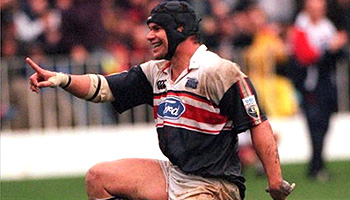 The 2009 Super 14 kicks off this weekend as we get to see the best provincial sides in the southern hemisphere do battle for the honour of top dog as all sides will once again look to challenge last years champions, the Crusaders.

This week well be taking a look back at some previous seasons of arguably one of the best domestic competitions around.

With the rise of professionalism, the inaugural Super 12 tournament kicked off back in 1996, with the final being contested by the Auckland Blues and the Natal Sharks. Auckland dominated for a few years, with players such as big Joeli Vidiri and Jonah Lomu featuring prominently.

The Blues, with a young Carlos Spencer leading the way, won again in 1997 before they were outdone in 1998, with the emergence of what would be the most successful team in Super Rugby history the Crusaders.

This clip shows tries from some of the top teams throughout those three seasons and will bring back some great memories for those who watched the matches and players at the time. Its also a collection that gives great insight for those whove never seen Super 12 footage from the era.