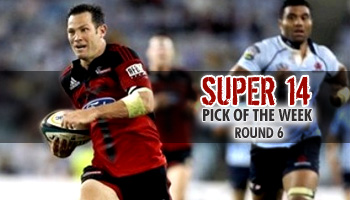 Bags of quality tries have become the norm for this season’s Super 14. This week, the New Zealand sides finally turn up to produce some end-to-end magic, the South African Sharks and Bulls defend their places at the top of the log while the Australian franchises have had a week to forget.

Two long range tries from the Sharks wingers punished the pretty in pink Western Force who struggled up front all evening. The Crusaders were back to their best with some of the best passages of play all season, from any team. With sweeping back play taking them from sideline to sideline and some brilliant interplay from typically athletic Kiwi big men, have the Crusaders sparked a turn around or is it all too late?

The Chiefs escaped the mid-table log jam with a nine try blitz of New Zealand rivals the Blues, squeezing themselves into the top four. The Sharks are leading the pack with the Bulls close behind. The Waratahs, despite a close loss to the Crusaders retain a third place ranking. It is a matter of a one or two point difference for most teams, meaning it could take just one good game (or one bad one) to see much of the table totally revamped.

A special mention goes to All Black flier Sitiveni Sivivatu, delivering twenty of the Chiefs 63-34 victory, in the form of four superbly taken tries. We’ve thrown in a few of the best tries for our Round 6 Pick of the Week.