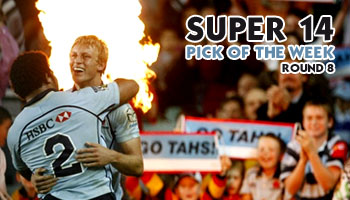 As we head into Week Nine of the 2009 Super 14 we take a look back at the best of last weekends action, with our weekly Super 14 Pick of the Week.

At the top of the table things are looking tight, with the Sharks, the Chiefs, the Waratahs, and the Bulls all juggling for those semi final positions. Theres still plenty of time for a few other sides to sneak in, but at the moment, the top four are most impressive.

Akona Ndungane picked up two against the Crusaders in Christchurch as the Bulls came close to an upset, while the Brumbies scored a few well made tries against the Cheetahs, including a Mark Gerard dribbling effort and a nice individual Christian Lealiifano try from some excellent stepping.

The team that week in and week out seems to produce some spectacular tries, the Chiefs, produced yet another great try that swept the width of the field before Jackson Willison finished nicely. Injury prone Andre Pretorious featured in that match for the Lions, as he stepped a few defenders before offloading for Jano Vermaak.

Probably the performance of the weekend though was in the Waratahs and Stormers match, as Lachie Turner scored two cracking tries, showing what an exciting prospect he is.

The first was self made with a neat chip ahead then great control to score. The second came from a classy bit of play from another youngster, Kurtley Beale, who broke the line then put the kick in for the rapid Turner to chase. Turner calmly did the rest, then got the hooker bear hug as reward.