The BEAST flying down the wing in Perth 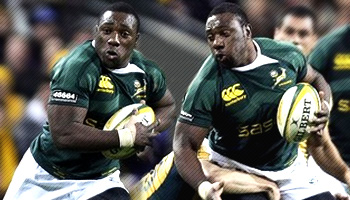 One player that provided a glimpse of excitement for disappointed South African fans in Perth on Saturday night was Tendai Mtawarira, affectionately known simply as, The Beast.

The Zimbabwean born prop from the Natal Sharks has come on in leaps and bounds since converting from a flank to the front row. He is now a standout performer whenever he wears that black jersey, and more recently, the green and gold of the Springboks.

Mtawarira made his Test debut against Wales, and ran in for a

the very next week. Hes rapidly becoming a cult hero at Kings Park and around the world, with crowds bellowing

whenever he touches the ball or makes a tackle. Its quite a phenomenon, and one that Beast himself has come to enjoy.

“It is a bit overwhelming. For me, it is very humbling to hear the crowd chant my name. The guys always tease me about it. But it is awesome, hey. You just hear a hum, like a big hum,” he said.

He says hes been called Beast since he was 8 or 9, when he was bigger than all the other kids at his Harare primary school.

Late in the game against the Wallabies on the weekend, we saw the Beast take off down the right wing with a run that started close the Springboks tryline and ended after an offload somewhere around the halfway line. It included a handoff, sidestep, shimmy and possibly even a change in direction, and would have made front rowers around the world proud.

There was even a hint of a BEEEEEAST from the Perth crowd, made up partly of the South African expats whove all but taken over the Western Australian city.

He made another short burst, this time up the left wing just before the final whistle, but was stopped successfully and didnt pull out the sidestep on that occasion.

These runs lasted for a matter of seconds, but the impact with fans was huge as we’ve received many an email requesting to see this footage again. Enjoy.