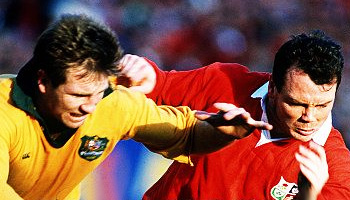 The 1989 British Lions tour of Australia will be remembered as one of the most confrontational battles to be seen in Lions rugby history. More importantly though, it was a tour that produced a historic Series victory for the Down Under.

, the Lions tour of Australia encompassed a 12 match schedule, with the visitors coming out highly successful, winning all eight non test victories.

They lost the first test in Sydney, but in the second in Brisbane they didnt back down to the Wallabies, and a few

broke out that had the hostile media labelling the visitors thugs.

The platform was set for a classic decider as the two teams went into the third and final test squared at one-one, with plenty of animosity adding to the occasion.

Much of the match was decided by the boot, with respective goal kickers Michael Lynagh and Gavin Hastings having a contest of their own until a costly error that will never be forgotten.

Star Australia winger David Campese had been starved of possession for the majority of the match, and it was that frustration that led to one of Campos most notorious blunders, and a moment that possibly cost them the test series.

After an attempted drop goal by

went wide, Campese picked up the ball and instead of dotting it down or booting it down field, decided that there was an opportunity to counter attack.

He was confronted by Lions wing Ieuan Evans, and thinking that he would have drawn in the defender, he threw a pass out to Greg Martin, who was completely unaware of his intentions.

The pass was a shocker, and it allowed Evans to easily dive on the ball and score the soft try that resulted in the Lions winning the test as well as the series.

Campese was severely castigated in Australia for his failed attempt at the spectacular, and the moment would be one that haunted him for years to come.

It was my fault because I tried to step inside and pass at once, thinking that Evans would come with me, Campese wrote in his autobiography On a Wing and a Prayer.

In fact, when I passed, he was in between me and Martin, and when I threw such a hopeless pass he had a simple job in touching it down. I still think the idea was perfectly sound, it was just that the execution was wrong.

So the try enabled the Lions to snatch a historic 19-18 victory, and take the Test series 2-1 by the narrowest of margins.

Classic Punchups From the Past – Part 1