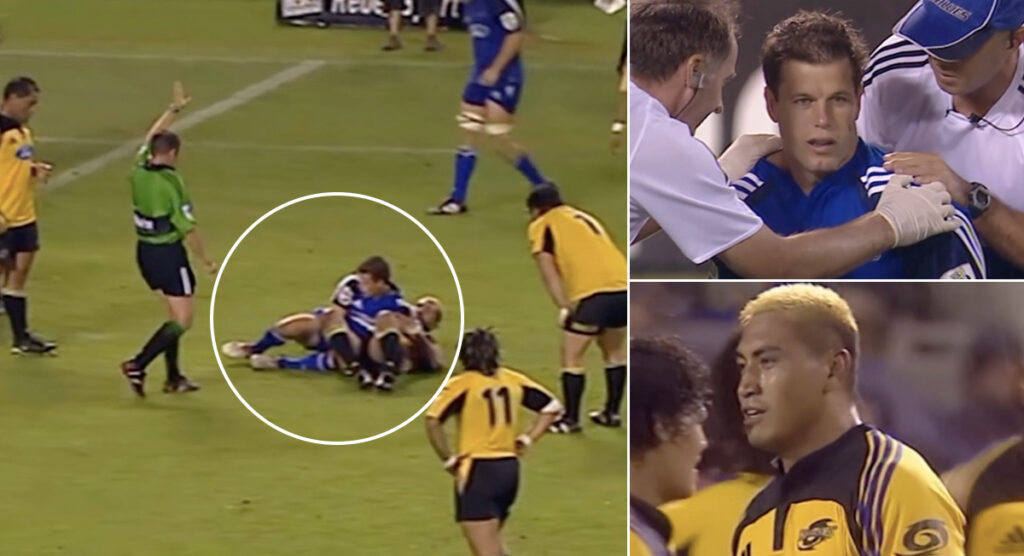 While we get excited for the first return of rugby since the coronavirus pandemic hit, there have been many trips down memory lane in the build-up to Super Rugby Aotearoa. Here is one such moment from 2006, featuring a late legend of the game.

Super Rugby Aotearoa kicks off in New Zealand on Saturday in what will by all accounts be the first sporting occasion in the world with crowds in attendance, since covid-19 brought the sporting world to a sudden halt.

The weekend starts off with the Highlanders and the Chiefs but Sunday’s match between the Blues and the Hurricanes is one everyone is focussed on, as it features All Black Beauden Barrett up against his old team.

In the build up, the full match of the same two teams meeting in 2006 has gone live on an official channel, giving fans a chance to relieve some magic from years gone by, with some legendary players taking part.

One such player was Jerry Collins, who along with his partner, tragically passed away 5 years ago.

Collins was much loved in the rugby world, particularly for his abrasive style of play but also because he was a gentleman at the same time.

This moment from the 2006 Super Rugby opening game was a perfect example of the kind of player he was, as Blues halfback Steve Devine, unfortunately, got his head thumped to the floor by Collins, but what happened next was another great example of the class of the man.

It was a fairly subtle gesture but one that wasn’t missed by those around him, and indeed the commentary team watching on.

Sadly, Devine actually spoke out about his concussion issues a few years later, in 2012.

WATCH: How dangerous are concussions in Rugby?

In his first Test for the All Blacks he was knocked out twice in the first half. A year later he was knocked out in the Super 12 semifinal. The nuggety halfback kept at it. By 2006 however, he started to notice something was wrong after taking ‘three in three weeks’.

So the seriousness of this tackle on him should not be discarded, but it was good to see that Collins was at least fully aware of what was happening, and did his best to help out a fellow player.

In this instance, Devine stayed on but from the Hurricanes scrum that restarted play, he shifted across into defence only to look up and see Ma’a Nonu running straight at him. Needless to say, Nonu glided through, scoring a try under the posts.

You can watch that, and the full match if you choose, here.