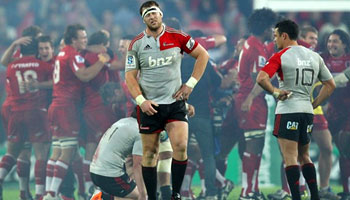 The Wallabies are hoping that the success of the Queensland Reds will help boost their spirits as they head into a Tri Nations, and then the Rugby World Cup. The Wallaby squad has been announced, and includes 15 of the Super Rugby final winning Reds.

The state of Queensland is still on a high after their impressive 18-13 win over the Crusaders in Brisbane yesterday. The achievement has been two years in the making, and has even had opposition lock Brad Thorn admitting that hes happy for them.

“I’ve grown up here so I know there have been some hard years,” said Thorn, who played for the Brisbane Broncos 200 times in the NRL.

“My brother played for the GPS club in 1996, that’s when rugby was really strong here. Queensland was a proud union, one of the strongest in world rugby. It’s been a tough sort of decade … the crowds were so low and teams around Australia came along and took the (player) depth away. To see Queensland rugby so strong, there’s a big part of me that appreciates that. I think it’s a good thing.”

The Reds had been sitting at the bottom three of the table for many years before coach Ewen McKenzie took over in 2009. In 2007, they took a 92-3 hiding from the Bulls, the competitions worst ever loss. In the past two years however, theyve turned things around drastically, narrowly missing out on the playoffs last year, but having won 23-31 matches.

“This team, all year people have doubted us and said we couldn’t do it. Well, with this game I think we showed them we can. And we did it,” said captain James Horwill.

Yesterday a clip of the Genia try was shown, so heres a highlights package that covers everything else. It was a brilliant game with plenty of incident, so some bits werent included to keep the video length down. Enjoy, and congrats to the Reds on a superb season.