The Springboks outmuscle Wales at the Millennium Stadium 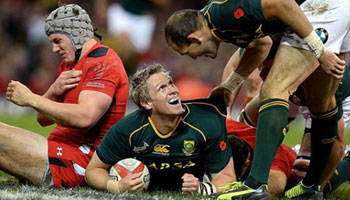 The Springboks scored three tries to nil as they beat Six Nations champions Wales 24-15 at the Millennium Stadium on Saturday. The Welsh were hoping to claim their first big Southern Hemisphere scalp in five years, but weren’t able to threaten the tryline.

South Africa physically dominated the Welsh, who have beaten them just once in 27 matches.

The home side, who had 11 Lions in their starting lineup, lost players to injury as the Boks showed great patience in defence, and were clinical when the opportunities to score arose. South Africa also had to adjust, with flyhalf Morne Steyn going off with a niggling back spasm fairly early on.

Wales dominated territory and possession, and while the South Africans had to play ten minutes with 14 players due to a yellow card, the home side failed to create try-scoring opportunities.

Leigh Halfpenny kicked all of Wales points, while the Springboks scored tries through Jean De Villiers, Bismarck Du Plessis and Fourie Du Preez, who put in another Man of the Match performance. It was the first time Wales didn’t score a try against them in five years, and South Africa’s biggest win in Cardiff since 2007.

Referee Alain Rolland was a constant focus and seemed to disrupt the flow of the game, with the scrums at one stage going uncontested after he sent off a prop from each side. He and his assitants also failed to spot a player in front of the kicker for the third South African try.

“We made a huge step up in our defence and we used most of the chances we got our there,” said Springbok coach Heyneke Meyer post match.

“The experienced players did very well – Wales played great rugby at stages during the second half you but never got the sense there was panic in the side. I was also pleased that we gave opportunities to a couple of youngsters and they all made a difference.

“This team is growing, but we will keep our feet on the ground, remain humble and now start focusing on our next game,” he added.

A battered and bruised Wales have had to bring in Scarlets props Samson Lee and Rhodri Jones, as well as Newport Gwent Dragons duo Hallam Amos and Tom Prydie. Eli Walker and Ryhs Patchell have returned to their regions for further treatment, while Jonathan Davies will be out for a while with a pectoral muscle injury that if surgery is required, could keep him out for up to five months.

Adam Jones has a calf strain while Liam Williams took a knock to the head and will be assessed.

“It was brutal from start to finish. South Africa were aggressive in both attack and defence,” said hooker Richard Hibbard. “I think the boys stuck to it well and we went toe to toe, but they won in the end. It was frustrating. We went into the game sure we could win it.”

South Africa play Scotland at Murrayfield next before heading to Paris to meet France, while Wales will need to lift themselves for what should be another physical encounter, against Argentina.