The Top 5 Swan Dives of all time 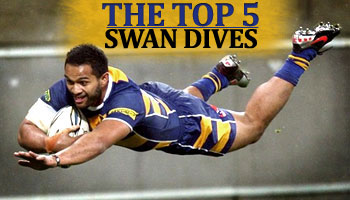 As mentioned on Friday, the Rugby Club in Australia has changed formats slightly, has some new features, and is now called RugbyHQ. Here is a look at what is likely to be a popular regular segment, the Top 5’s, starting off with some classic swan dives.

When you think of memorable swan dives over the years, you’ll probably picture something different depending on where in the world you come from, and who you support.

England fans may think of Chris Ashton and the Ash Splash, while South Africans might remember Griquas winger Jearus Nicholas, who broke his collarbone performing one of his signature dives.

Rugbydump regular Sean Maloney, whose dulcit tones could be heard commentating the Reds game over the weekend, has put together RugbyHQ’s pick of the Top 5 Swan Dives in recent times.

Starting off with what would probably be more of a flop than a dive, it’s big James Horwill against France in 2008. That game was remembered for, amongst other things, the huge fight that resulted in his new party trick – being able to touch his eye with his tongue.

Lelia Masaga’s great try against Wellington in the ITM Cup in 2010 got a special mention, but mainly for the celebration, as did Adam Ashley-Cooper’s effort in 2009.

At number two it’s Bryan Habana’s dramatic last minute try against the Sharks in the Super 14 final of 2007, and at number one it’s the moment we featured here on RD when it happened, as USA Eagles captain Todd Clever quite literally flew over for a try at the George Sevens.

Each one of these moments can be viewed again, with longer clips, in the Related Posts listed below