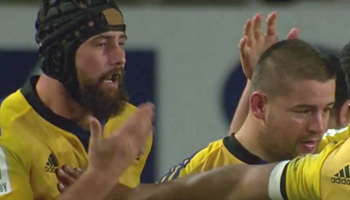 Rugby HQ’s Sean Maloney gives us the run down on some of the more bizarre bits of play that took place in the world of rugby last weekend. This is the latest edition, round 16, and you can also view last week’s video, round 15, on page two of this post.

This week’s wrapup is loads of fun, with a few things that you definitely wouldn’t want to happen to you. First up there is one of the most lethal looking falcons ever, as a player charges down a clearing kick, with his face. It looks pretty bad, but we’re assured he’s okay. Moving on.

Speaking of clearing kicks, there’s a look at the James O’Connor blooper, and a few others too, with a flashback to Nick Cummins’ howler, and Drew Mitchell making a meal of a kick in 2005.

Hurricanes forward Blade Thomson did little to raise the bar as he celebrated by slapping himself in the face, while referee Marius van der Westhuizen got pushed around in the Waratahs vs Crusaders game. And we get to see the same happen to Stu Dickinson.

Finally, there’s a quick look at a lovely try from the Australian Women’s 7s side.

The Wraparound for Week 15 was top notch, with Sean Maloney delving into the weird and wonderful sights from the world of rugby.

The London Sevens was the hot topic, with such eventful moments as Colin Injera’s now infamous camera signing celebration after his 200th try on the World Rugby Sevens Series tour, as well as the USA’s Carlin Isles, the so called “fastest man in rugby”. Has sprinting ever looked so easy?

On the subject of celebrations, Rayno Benjamin of the Cheetahs celebration against the Highlanders is worth another look. Not only is it unique, but he did it despite the fact that his team was 30 points down at the time!

Again another celebration, although this one was a little premature, from Henry Seniloli shows you why it is probably best to dot the ball down before you commence the festivities! Even worse for him is that he injured himself in the process in a moment that arguably cost his side the game.

From the throws of professional rugby, lets not forget about the grassroots game and in particular ladies day at the Manly Marlins who give us an example of how best not to take on a tackle pad. Best if you youngsters look away now!

Finally, be sure to keep your eyes peeled for a classic clip from the archives including one George Gregan, and how shall we say… a questionable line out call?