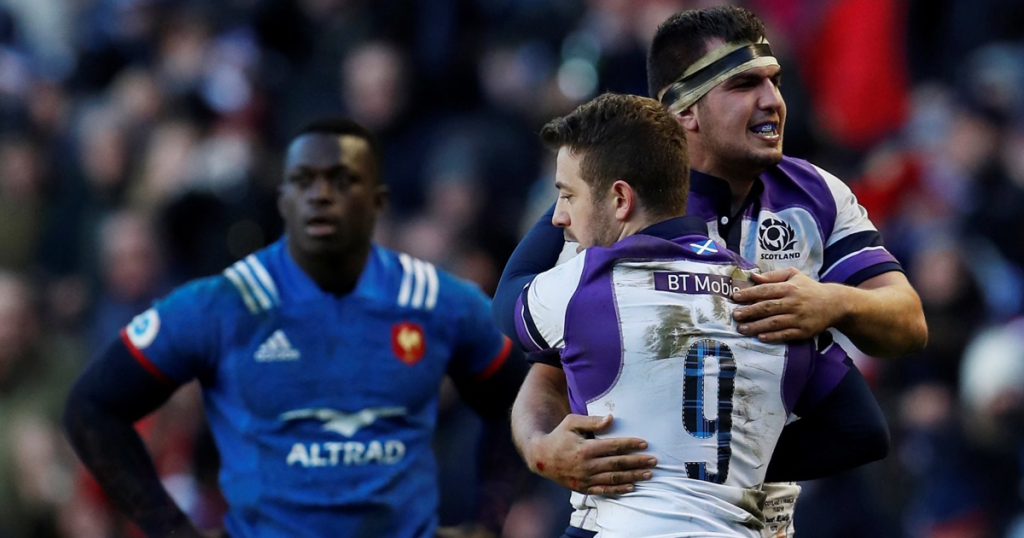 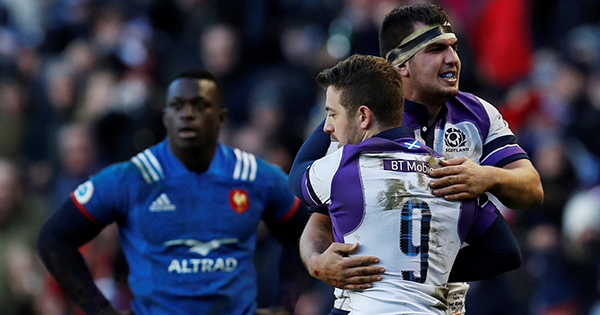 Scotland produced a remarkable comeback to beat France 32-26 in a 6 Nations thriller at BT Murrayfield, to take their first win of the 2018 campaign.

France dominated the scoreboard for the majority of the game, having taken an early 10-0 lead thanks to a Teddy Thomas try and two kicks from scrum-half Maxime Machenaud.

There were no tries in the second half as indiscipline from both sides left it to kickers Baptiste Serin – who replaced Machenaud after the break – and Man-of-the-Match Greig Laidlaw.

The latter proved the difference and the Clermont scrum-half’s six second half penalties were enough to take Gregor Townsend’s men over the line for a fifth successive 6 Nations victory at home.

Nip and tuck the whole way

Ever the unpredictable, France came out of the blocks firing on all cylinders and Thomas was the catalyst for both of Jacque Brunel’s side’s tries.

The first sent shockwaves across the Murrayfield crowd with a mesmeric step on opposite number Tommy Seymour. The winger then rounded Stuart Hogg to cross for an easy opening try, sending the thousands of travelling French support into raptures.

His second was a combination of ingenuity and the bounce of the ball. Again, Hogg was the unlucky party as the ball painfully slipped away from his grasp, allowing Thomas to canter in.

While France barely had to work for their scores, Scotland had to be patient. When they did manage to put the ball through the hands, they got their reward.

Maitland’s try finished off a lovely period of phases, with Hogg the instigator with a probing kick through sending French full-back Geoffrey Palis into desperate defence.

In response to Machenaud’s penalty, Jones picked a sumptuous line off Laidlaw from close-range to speed in under the posts.

In reality, this was a must-win match for both sets of players, but ultimately, Scotland showed that last weekend’s horror show against Wales was simply a blip. They still leaked silly tries but showed a resilience and determination to pull off a victory which seemed unlikely for 71 of the 80 minutes.

For France, this was a much improved performance to the one they produced the last time they visited Edinburgh, but was still some way off what they could have done.

They had the beating of the Scots in the opening 40 minutes but persistent infringing at the breakdown in the second period was the key. They matched the intensity of Scotland but failed to find the critical opening to overpower the home side.