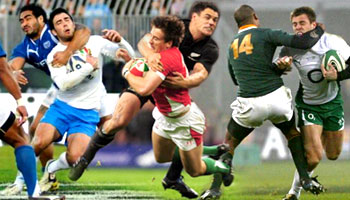 Yesterday Samoan back Henry Faafili was suspended for three weeks following his high tackle and red card against Italy last weekend. This once again makes a mockery of the disciplinary process, as there were two very similar incidents recently that had entirely different outcomes.

Despite Faafilis clean record, the tackle he made on Luke Mclean was deemed to be dangerous and an independent Disciplinary Committee banned the Leeds Carnegie player until Dec 21st.

Faafili was red carded for the tackle. That alone was questionable. A yellow card would probably have sufficed. To get suspended as well, throws the whole process into question.

The problem is the inconsistency that were seeing week in and week out. If that type of tackle is a red card worthy offence, fine, but we need to be clear about that.

Not too long ago All Black Dan Carter was given a one week suspension for a high tackle on Martin Roberts of Wales. The tackle was missed by the ref as it happened, but Carter was given a slap on the wrists after the Welsh media and coach made a hoo-hah about it.

So one week because it was missed on the field, but three weeks for Faafili after he was red carded and penalised. Was Faafilis tackle

much worse than Carters?

Then, during the clash between Ireland and South Africa at Croke Park, JP Pietersen stuck out a despairing arm in an attempt to stop Tommy Bowe as he stepped inside him. His arm caught Bowe square in the nose, but no action was taken.

Referee Nigel Owens apparently said Bowe ducked into it. Even if he did, it was still a dangerous tackle, as the blood from Bowes nose confirmed.

Pieterson was neither penalised, nor carded, and there has since been no suspension. Can we then assume that Faafilis tackle was three times as bad as Carters, and Pietersen getting nothing was because the Irish didnt cause a stink about it?

Im tempted to say that had Ireland lost the match, Pietersen would be suspended by now. If Wales had beaten New Zealand, the Carter hit would be forgotten about and he would never have been suspended.

The point is that this year, the disciplinary process has been a farce, and something needs to change. As fans, were not only baffled by the decisions most of the time, but were also being let down when it comes to understanding the processes.

Were these three tackles so extremely different that one got nothing, another got a week, and the third warranted a red card and three week suspension?

According to the powers that be, the answer is apparently a resounding yes.