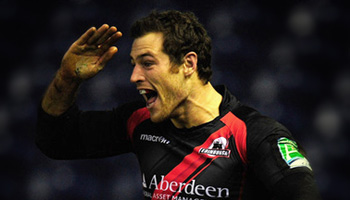 Scotland internationalist Tim Visser is set to start against Leinster in the Guinness Pro12 this weekend, in what could turn out to be his final Edinburgh match. The Dutchman, who has spent six years with the Capital club will switch to Aviva Premiership side Harlequins in the summer.

Fittingly, Edinburgh Rugby have produced a tribute video to one of the most popular and charismatic players in the club’s history. The winger also answers questions from fans and speaks of the new challenge that lies ahead of him.

Visser joined Edinburgh at the beginning of the 2009-10 season after a two year spell with Newcastle Falcons. His impact upon moving north of the border was felt immediately, becoming the Pro12’s top try scorer with 10 in his first year, and then repeating the feat for three consecutive years as well as entering into the Pro12 Dream Team four years in a row.

It was performances like these that elevated him to international level and, after three years of residency, he made a try scoring Scotland début against Fiji in the summer of 2012.

The 27 year-old developed an astonishing strike rate of 67 tries in six seasons – easily becoming the club’s record try scorer, amassing 335 points. He has also scored seven tries for his adopted country, including two against the World Champion All Blacks three years ago.

But despite reaching the Heineken Cup semi-final in 2012 and the Challenge Cup final this year, silverware has frustratingly eluded the success driven Dutchman. Only the 1872 Cup victory over Glasgow has produced anything tangible.

No doubt the influence of the ‘Flying Dutchman’ will be sorely missed by fans and team-mates alike. But Visser also leaves with a heavy heart.

“It’s obviously my last game of the regular season, and it could be my last game for Edinburgh. It’ll be a good occasion but it might be slightly emotional,” Visser said.

“Thank you to the Edinburgh Rugby fans for six great years at the club. I look forward to saying goodbye to you all this Saturday at my farewell game.”