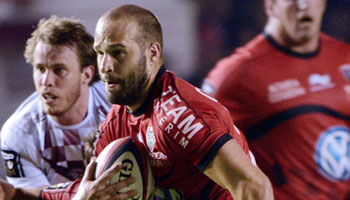 Toulon have stormed to the top of the Top 14 table with four impressive wins to start their 2012/2013 campaign. They beat Bordeaux Begles 42-12 in their first home match of the season, which included five tries and a bonus point.

The Stade Felix Mayol was as intimidating as ever as Toulon, after wins over Perpignan, Racing Metro, and Mont de Marsan, were in the mood to turn it on against the visiting Bordeaux.

Flyhalf Jonny Wilkinson, who has already been mentioned as a possible British & Irish Lions tourist for next year, was forced off the field with a head knock after just 20 minutes. He was replaced by Frederic Michalak following a David Smith try.

The halftime score was just 13-6, but Delon Armitage and Mathieu Bastareaud both scored in the second half, with Maxime Mermoz picking up a double. Michalak kicked 3 penalties and conversions.

“Wilkinson was slightly dazed but without seriousness,” Toulon said. He will be rested for their Friday night game against Montpellier though, with Michalak likely to be starting at number ten.

He will more than likely be up against incumbent France flyhalf, Francois Trinh-Duc, which will give national coach Phillipe Saint Andre a good chance at assessing the form of both players.

The highlights below include some scrappy tries, some slick play, and some good power at the end.

Over to you:
– What are your thoughts on Michalak as the possible France number ten in future?
– Do you think Jonny Wilkinson is a realistic option for the Lions tour next year?
– Should bulky Mathieu Bastareaud be playing as a forward?