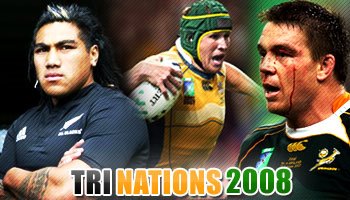 The biggest tournament in the Southern Hemisphere kicks off tomorrow as the World Champion Springboks take on the mighty All Blacks in the opening game of the 2008 Tri Nations series.

It’s one plays two as South Africa look to follow on from their World Cup success and retain the number one spot in the world, with New Zealand gunning to topple them in front of a packed Wellington crowd. New Zealand at home will always be the favourites, as is illustrated by South Africa’s poor record away from home.

If ever the Boks had a chance of beating the AB’s in New Zealand though , it’s this year, and that’s one of the reason’s why this years tournament should be a closely fought affair. Some are calling it the biggest Test of the year, and they’re not far off considering recent results from the two powerhouses of world rugby.

Both sides are rebuilding. South Africa with a new coach and one or two new faces, and New Zealand recovering from the mass exodus after their disappointing result in France.

Australia, perhaps the underdogs in this years tournament, are themselves experiencing a fresh start, with a new coach and a new lease on life. They will play France tomorrow as that series comes to an end, before they join the Tri Nations to play South Africa in Perth in three weeks time.

The 2008 Tri Nations promises to dish up another helping of top quality rugby, the kind of rugby we’ve seen over the past ten years. The prospect of seeing the Springboks, Wallabies and All Blacks do battle until September is something that will surely get rugby fans pulses racing all over the world.

This short preview highlights a few great moments from the past, and gives you a slight taste of what’s to come.

Inside the Fire by