Tribute to Fijian and Toulouse back Maleli Kunavore - died aged 29 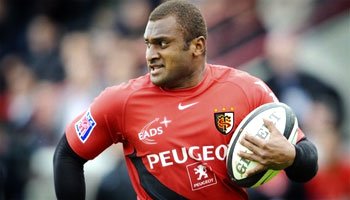 Late last week we heard of the tragic passing of former Toulouse and Fiji flyer, Maleli Kunavore. He died in hospital in Suva on Thursday night, shocking the rugby world as tributes poured in. Here is a video tribute, as well as praise from Franck Boivert.

Kunavore enjoyed five succesful seasons at Toulouse before leaving in 2010 following injuries to his arm, and perhaps more significantly, having to undergo heart surgery. Last week he reportedly had another heart operation, which is believed to have been related to his death a few days later.

He played for Fiji seven times, including at the 2007 Rugby World Cup, and made 80 appearances for French powerhouse Toulouse, which included winning the Top 14 title in 2008.

National Coaching Director of the Fiji Rugby Union, Frank Boivert, has paid tribute to him, stating that when Toulouse were looking for a center in 2005, he knew it should be Kunavore.

“His physical abilities were out of the ordinary, he had the capacity to stand up and resist into the tackle giving more time to his captain Thierry Dusautoir to come and support. He was a precursor in advance on his time, his offloads inside the defence were before Sonny Bill Williams did it, and he was one of those few who could do it,” Boivert explained.

“Finally the cherry on Maleli’s cake was his kicking for goal. What a thrill to see him convert a penalty that sealed the game for Toulouse against Clermont in the final of the French Championship. The stade de France was packed with his 85 000 spectators, millions more glued to the television screens. Maleli did not shiver, he kicked the ball straight in between the bars, sending him with the stars in eternal glory.

“On December 3, 2012 the Toulouse big crowd will applaud Maleli for one minute before the kick off in their Top 14 game versus Clermont after they watch one last time on the big screen of Maleli’s outstanding plays.

“Last weekend, Thierry Dusautoir asked the Toulouse players to wear the black arm band in memory of Kunavore when they took the field for France. Both Vincent Clerc and Yannick Nyanga scored outstanding tries and we all know it was Maleli spirit who took them over the line,” he said.

Kunavore’s wife, Fiji Rugby Union staff, and players from the 2007 Fiji team will all travel to Nakalavo with his body before the traditional reguregu is presented, and he is laid to rest on Friday.

Below is a tribute video that was made after he retired from rugby in 2010. May he rest in peace.