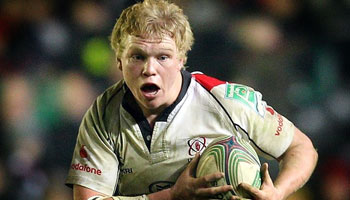 Hundreds turned out at Ballynahinch Baptist Church to pay respects to the Spence family following the devastating deaths of young Nevin, his brother Graham, and their father Noel. While we’ve covered the story on social media, today we acknowledge the passing of three great men with a short tribute and video summing up events.

On Saturday evening Ulster rugby player Nevin Spence died alongside his father and brother after they fell into a slurry tank on the family farm. Sister Emma tried to save the men, who were attempting to save one another, but she inhaled fumes herself and was taken to hospital to recover.

Emma said that ‘wee-Nev’ was sarcastically nicknamed ‘Superstar’ at home, because they all knew he was destined for great things, but he hated the limelight, even if he did handle it like a pro.

Nevin’s coffin, draped in his team jersey, was carried into the church by his Ulster teammates.

While we talk about rugby and focus on Nevin, this was not only a sporting and farming tragedy, but a human tragedy. To have three family members go in a matter of minutes… fathers, brothers, sons, is devastating beyond belief.

It has touched many not only in Northern Ireland, but all over the world. Tributes continue to pour in as days after the accident, many still find it difficult to comprehend.

World number one golfer Rory McIlroy has said he’s been hit hard by what has happened.

“He will always be remembered. He was a great rugby player and I think everyone will agree he was an even better person and he will definitely be long in the memory of a lot of people,” he said.

Slurry is a mixture of cow manure and water, used as a natural fertiliser. The gases generated when it decomposes in slurry tanks can be lethal. It’s believed that one of the men tried to rescue a dog from a tank, which led to another trying to help, and Nevin and Emma getting involved too.

Nevin, who by all accounts would have gone on to represent Ireland, was just 22. His brother Graham was 30, and has two young children. Father Noel was 58.

Ulster’s match against Zebre has been postponed as a mark of respect. A book of condolence is open at Ravenhill until the end of the week, so if you’re in the area and are able to stop by to pay your respects, please do. It’s open from 9am to 5pm if you would like to leave a tribute.

Below is a video compiled of some of the news reports from the past few days, and some footage of Nevin in action. Please feel free to leave a comment about Nevin or his loved ones below. RIP.

Credit to BBC for their news reports and footage