Wales overcome the threat of the English in Cardiff 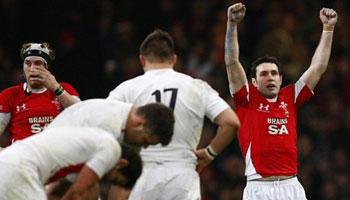 Reigning Six Nations champions Wales stayed on course for successive grand slams with a nail biting 23-15 victory over a much-improved England at the Millennium Stadium on Saturday.

England went into the match as underdogs but outscored Wales two tries to one, despite being down to 14 men after two sin-binnings.

But ultimately it was this indiscipline which cost England as Wales kicked six penalties through Stephen Jones and Leigh Halfpenny.

Halfpenny more than played his part with a successful 46 metre penalty and then by scoring Wales’s only try, where the 20-year-old Cardiff winger’s pace ensured a four-on-two overlap was not wasted.

“He’s a young kid and he’s getting better and better.”

England manager Martin Johnson, on the wrong side of the result, was convinced his team should have emerged from the heavyweight clash in Cardiff with a win.

“We let the match slip away. We had opportunities to win and we didn’t take them,” Johnson told BBC Sport.

Wales next face a crunch match in Paris against France.