Wales robbed by the ref 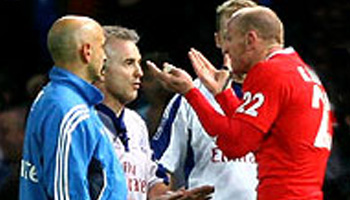 Italy beat Wales 23-20 in this years Six Nations at the Stadio Flaminio. A great victory for the Italians, but overshadowed by a terrible refereeing decision at the end.

Wales were awarded a penalty, having checked with White that there was time for them to kick for touch and go for a match-winning try, they turned down the chance to go for the three points that might have earned them a draw.

When Wales did kick for touch White immediately blew for full-time leaving the Wales players angry and frustrated.

White was at least man enough to issue an apology for the confusion though. The Italian halfback Alessandro Troncon had no sympathy for the Wales players, blaming them for taking too long deciding what to do. He said: “Wales had 10 seconds left to play but the referee was correct because the Welsh players were talking about what to do and they took their time. Fortunately for us the official correctly decided to blow the final whistle.”