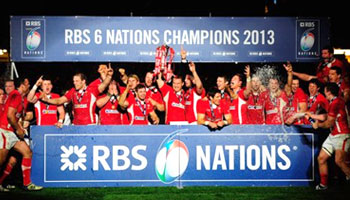 Wales produced a thrilling attacking display as they achieved their biggest ever Six Nations victory over England, scoring two great tries in the second half. Man of the Match Justin Tipuric played a large part in all things good on the night.

The first half was a frantic and tense affair that added weight to the theory that the Millennium Stadium roof should always be closed when the weather is poor outside.

The two sides went into the halftime break fairly evenly poised at 9-3 to Wales, but a second half demolition job inflated the score and put pay to England’s determinded Grand Slam ambitions.

Alex Cuthbert scored the two tries for the home side, one with a great wingers finish and the other after flanker Tipuric put him away after a big sprint down field.

“It is a bit unreal really, it is a dream to be honest,” Tipuric told the BBC post match.

“We played so well in front of a great crowd and our boys were outstanding and worked so hard for each other. We know what we can do and we have been ready since Monday, and to turn up Saturday and with such a great performance… we are chuffed to bits.”

Wales started the competition poorly, going into it with a string of defeats then losing to Ireland in their opening fixture, but bounced back well despite plenty of criticism from all corners.

“We had a lot of bad media but I think it gave us a bit of a kick up the backside,” Tipuric added.

England’s hopes of a first Grand Slam in a decade were crushed, while Wales achieved their second consecutive tournament win, with some players clearly sticking their hands up for Lions selection.

– Congratulations to Wales. Let us know your thoughts on the game as a comment below!