Wallabies bounce back with strong second half vs the Springboks 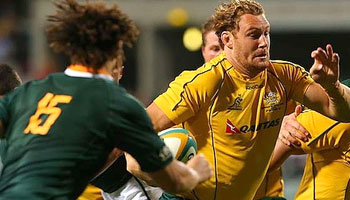 The Wallabies got their Rugby Championship campaign back on track with a 26-19 win over the Springboks in Perth on Saturday. Twenty points in the second half marked a much improved performance, easing the pressure on coach Robbie Deans.

South Africa led 13-6 at the break and looked to be playing the better rugby. Berrick Barnes kept chipping away at the scoreline with the boot though, and ended with six-from-six kicks at goal, adding to the second half tries by Scott Higginbotham and Ben Alexander.

Bryan Habana scored for the Boks in the first half, but the Wallabies got their tails up in the second and with Alexander’s 68th minute converted try, the game seemed out of reach for the visitors.

“I don’t think that we can suddenly expect to be the greatest team in the world and just click and play fantastic rugby. We need to learn from the experiences, we need to grow as a team and that takes some time,” said Jean de Villiers.

“We want to be winning every single game that we play and those pressures from the media, from the fans, we feel them at times. But we believe that we are on the right track.. that we played much better rugby today and hopefully we can keep on improving when we play next week as well.

“It is a young team but it is Test match rugby and you don’t have a lot of time to grow at this level. We need to quickly rectify those mistakes and hopefully get a better result next week,” he said.

Both sides have injury concerns, with Wallaby halfback Will Genia out for up to six months after rupturing the anterior cruciate ligament in his right knee. “I took the high ball, it twisted and I heard a few cracks,” Genia said.

Springbok prop Jannie du Plessis has a hamstring concern, and Habana has a problem with his ankle. Both are in doubt for their upcoming match against New Zealand.