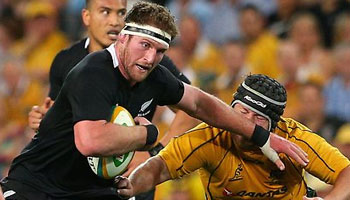 The All Blacks came within inches of equalling the top-tier world record of 17 consecutive Test wins as they drew 18-18 with a determined Wallaby side at Suncorp Stadium in Brisbane. Dan Carter’s drop goal attempt deep in added time sailed wide.

The current record is shared by the only two top-tier teams to have ever won 17 games in a row, the 1997-1998 Springboks and the 1965-1969 All Blacks. Lithuania hold the overall record (not tier-one or tier-two), but currently Cyprus need just three wins to match that feat.

It was an incredible end to a game of rugby that was tryless, as both sides kicked six penalties each before the Wallabies threw everything into it with time up, but were penalised after 23 phases.

The All Blacks could have kicked the ball out and taken the draw but skipper Richie McCaw called a scrum instead. What ensued was a frantic few minutes that ended with Carter’s missed drop kick.

“We’re really, really disappointed, too many avoidable penalties, too many avoidable mistakes,” said Steve Hansen. “It was probably one of the ugliest games of rugby I’ve seen. But to play as poorly as we did and still manage to show the character and tenacity to get the draw was pleasing.”

This was the third Bledisloe Cup game, which the All Blacks already claimed with their two previous encounters that formed part of the Rugby Championship. They’ve help the trophy since 2003.

Note: The highlights have now been updated with a better version