Wallabies sink All Blacks 34-19 in Sydney 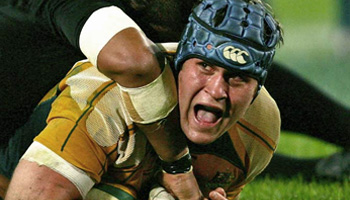 Australia stormed to a stunning 34-19 triumph over New Zealand in an exciting Tri-Nations encounter in Sydney.

Having led at half-time, the Wallabies were forced to come from behind following an early try from the All Blacks five minutes after the interval.

But as they have done throughout coach Robbie Deans’ five-Test stint at the helm, Australia found their way to the finish line with tries from forwards Rocky Elsom and James Horwill to extend their unbeaten run to five matches and claim top spot in the standings.

Fly-half Matt Giteau was superb throughout for the hosts, as was stand-in skipper George Smith and veteran Lote Tuqiri.

For the All Blacks, Dan Carter was at his sublime best, while Mils Muliaina and Sitiveni Sivivatu looked dangerous, but it was not enough to avoid a second consecutive defeat.

Ryan Cross, Peter Hynes, Elsom and Horwill were the tryscorers for Australia, while Muliaina, Andrew Hore and Andrew Ellis touched down for the All Blacks.