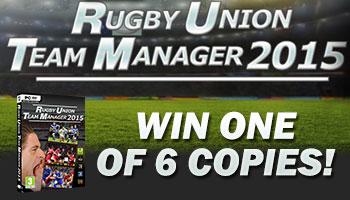 Late last year Rugby Union Team Manager 2015 was released, and we gave away a few copies here on RD. Now, in the height of the Six Nations, we’re giving away another 6 copies, and letting you know a bit more about this highly comprehensive rugby union management game, which has since been released in a French language version.

The feedback has been great so far, as fans have longed for a Rugby Union manager game forever. This Alternative Software release fills that gap, so now you, the rugby guru, can manage your own team as your pick of players take on all before them.

Rugby Union Team Manager 2015 delivers the most comprehensive rugby simulation ever produced, with Key leagues from the Aviva Premiership, the Guinness PRO12 (including professional sides from Scotland, Wales, Ireland and Italy), and also both the French TOP14 and PROD2, all officially licensed.

The game also includes teams from the Southern Hemisphere, in fact there are over 14,500 players and over 320 playable teams featured in the game. Plus you can even create your very own team with your own created players. And now, the game is available to play in both English and French.

It’s available via all good video game retailers, and as a digital download via Steam.

To learn more about the game please read our previous article about it, watch the video below, or visit the official Rugby Union Team Manager website.

ENTER BELOW TO WIN ONE OF SIX COPIES

T&C’s: The closing date for entries is midnight, Sunday 15th March 2015. Winners will be contacted via email. Entering above will subscribe you to the Rugbydump Insider. If you don’t like hearing from us, you can unsubscribe at any time.