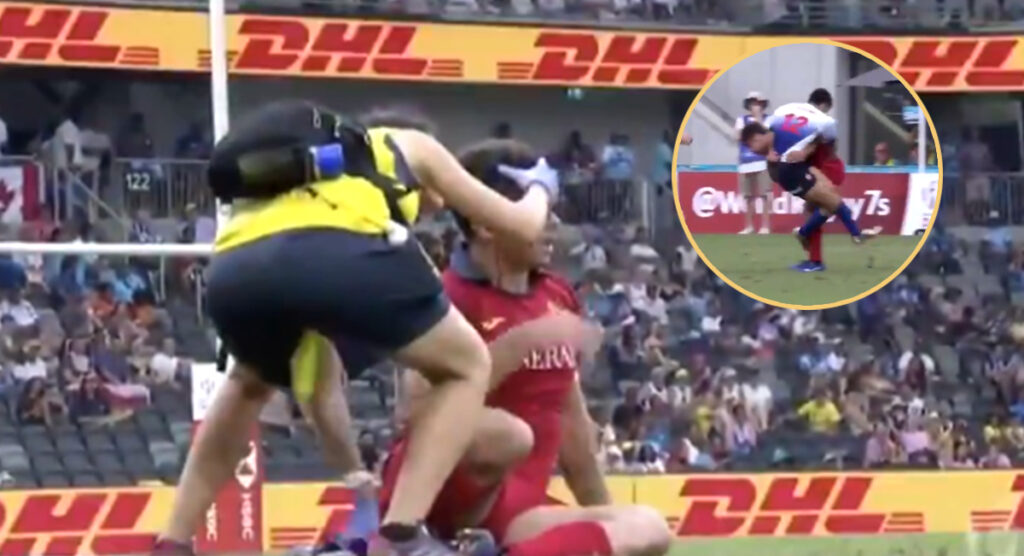 The Sydney 7s served up its usual dose of fun and entertainment, as Fiji beat South Africa in the final after another memorable World Series Sevens leg. In one of the pool games, a crazy moment happened, reminding us of similar such instances over the years.

In a pool game against Japan, a Spanish player was out of action, getting treatment for a head knock on the floor when suddenly, out of nowhere, adrenalin kicked in and he jumped up to not only get across to make a crucial tackle but to put in one of the biggest hits of the entire weekend!

For those who didn’t see it @WorldRugby7s – what are your thoughts on this? Sneaky, Cheeky or just a Cheapy? #ribs @rugbyunited #sporthurts #hideandseek #whammo pic.twitter.com/sF8fTxwPH7

Some fans online weren’t too happy about it, thinking it was unsporting. Whatever the case, we’ve seen a number of highly entertaining similar moments over the years, all featured here on the site.

In 2011, the man known as BOD came back from the dead after taking a big knock off the ball against Munster. Down getting treatment, he jumped miraculously to cut down an attacker.

To add to the man’s legendary status, twenty minutes later, he produced a mesmeric run and flick pass down the left flank. Brilliant.

A month later in a Tri Nations match, Wallabies star Beale did something very similar, after he too took a knock.

“He pushed the trainer out of the way.. jumped to his feet…” explained commentator Greg Martin, who then described how Beale jumped up in defence but sparked a counter attack, almost setting up a try in the process. To add to the entertainment, he then swore on live TV.

In 2013, then London Irish flyer Yarde was actually down receiving treatment for cramp against Saracens, but as the ball came his way, he saw an opportunity and adrenalin kicked in.

Up in a flash, he got himself into position to receive the scoring pass and duly finish off the try, leaving the physio to catch up with him again a minute or so later.

In the Varsity match of the same year, Cambridge player Jake Baker was injured in a similar position to some of these, then also popped up to make a crucial tackle.

That’s Sean Edwards’ voice you can hear in the clip, of course.

Feel free to share your reactions in the comments below! Do you know of any other similar moments like these?