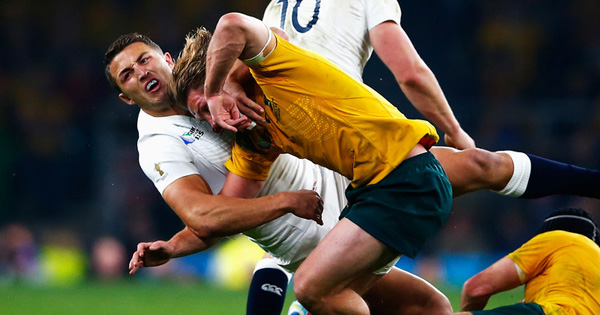 In the last week emotions have run high, mainly regarding foul play and how it has been dealt with by the powers that be. There have been some strange decisions made, both on and off the field. Here is a look at one that puzzled and annoyed some fans.

It was quite a strange incident as there were two big collisions taking place at exactly the same time. This obviously added to the confusion, and meant that one player in particular got away with having his indiscretion pretty much overlooked.

Michael Hooper was banned this week for his challenge on Mike Brown, and while that is a different discussion altogether, it was he who was the recipient of a high swinging arm by League convert and all round nice guy, Sam Burgess.

Burgess hit Hooper just as Owen Farrell put a big shot in on Matt Giteau. Giteau writhed on the floor in agony so took a lot of focus away from the Burgess shot.

Farrell walked, and while he had a decent excuse for making the tackle, Burgess on the other hand was high and fairly dangerous. He received a brief talking to and later got an official warning from the citing commissioner, but nothing more.

While some England fans have been vocal about Hooper not being carded earlier in the game, the reality is that on another day, England could have easily lost two players at once, as both challenges looked worthy of sin-binning. The communication between referee and TMO could have been better.

So the big talking point is, should both players have seen yellow? Should Burgess have at least been given a proper disciplinary hearing and perhaps a suspension?

By now you probably have your own take on it and at this stage it’s all completely subjective and inconsequential, but we’re posting this here for reference if you fancy discussing it.

If nothing else, the moment was a great example of the intensity and desperation of the occasion.

Highlights and discussion from England vs Australia

A hat-trick to Quinn Tupaea, and an impactful two-try cameo by Samisoni Tuakei'aho, has propelled the Chiefs to a big win over the Force in Hamilton.