A Tribute To big Brad Thorn, who will now retire aged 40 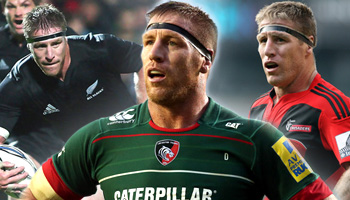 Leicester Tigers and former New Zealand second row Brad Thorn has announced his retirement from all forms of competitive rugby at the age of 40, after what can only be described as an outstanding career that has spanned an incredible 21 years.

Having been born in New Zealand, Thorn’s family moved to Australia while he was in his mid-teens. In 1994 he made his rugby league debut for the Brisbane Broncos where he stayed for 6 years, playing 130 games and scoring 22 tries.

Whilst at the Broncos, Thorn won the Rookie of the Year award, his first Premiership title and also earned a call up to the Australia side to tour Great Britain. His reputation continued to grow as he was selected for the Queensland State of Origin side three times, and went on to win a further two Premiership Rings.

During this time Thorn quickly became known as a fearless rugby player, never one to back away from a challenge, and entering every contest with a desire to come out ahead.

Union side The Crusaders were first to put pen to paper when Thorn made it clear he desired a return to his homeland, New Zealand, and signed the monster lock.

Having initially declined an opportunity to represent New Zealand at 15-aside due to his uncertainty over his commitment to the code, Thorn changed his mind and went on to play as an All Black through the 2003 Rugby World Cup, including a thrilling encounter with Wales, going on to win the Tri-Nations with the Kiwis in the same year.

History was about to repeat itself however, and the All Black lock switched back to the National Rugby League in 2005, heading back to Australia and playing for the Broncos. Before his return to union in 2008, a further three State of Origin appearances and yet another Premiership Ring were added to Thorn’s collection.

Far from finished with his haul of achievements, next on the checklist was winning the Super Rugby title with The Crusaders, swiftly accomplished in 2008.

In the 2008 Tri-Nations, Thorn was banned for one week after a dangerous tackle on South African forward, John Smit. The Springbok got his revenge a year later, when he blind-sided the Kiwi lock with a powerful and entirely legal hit.

A return to the national setup welcomed more Tri-Nations trophies in 2008 and 2010. His phenomenal work-rate and obvious desire to win did not go unnoticed and Thorn was a prominent feature for the All Blacks during their successful World Cup campaign of 2011.

In 2012 he joined Irish side Leinster on a three month contract, and featuring in the starting line-up for their Heineken Cup victory meant that Thorn became the first player ever to win a World Cup, a Super Rugby title and the Heineken Cup.

Having returned once again to the southern hemisphere to join the Highlanders, Thorn played his 100th Super Rugby game against the Sharks in 2013.

An unfortunate bicep injury made it seem that his stated goal of playing until he was 40 looked to be slipping away.

An extension to his career plans however saw him sign to Aviva Premiership club Leicester Tigers in late 2014, and once he finishes his season at the English based club, Thorn has announced he will retire, and lower the curtain on a truly extraordinary and impressive rugby career.

The video below shows some of Brad Thorn’s highlights. Check out page 2 for another amazing video featuring Brad that was made before a Bledisloe Cup encounter last year.